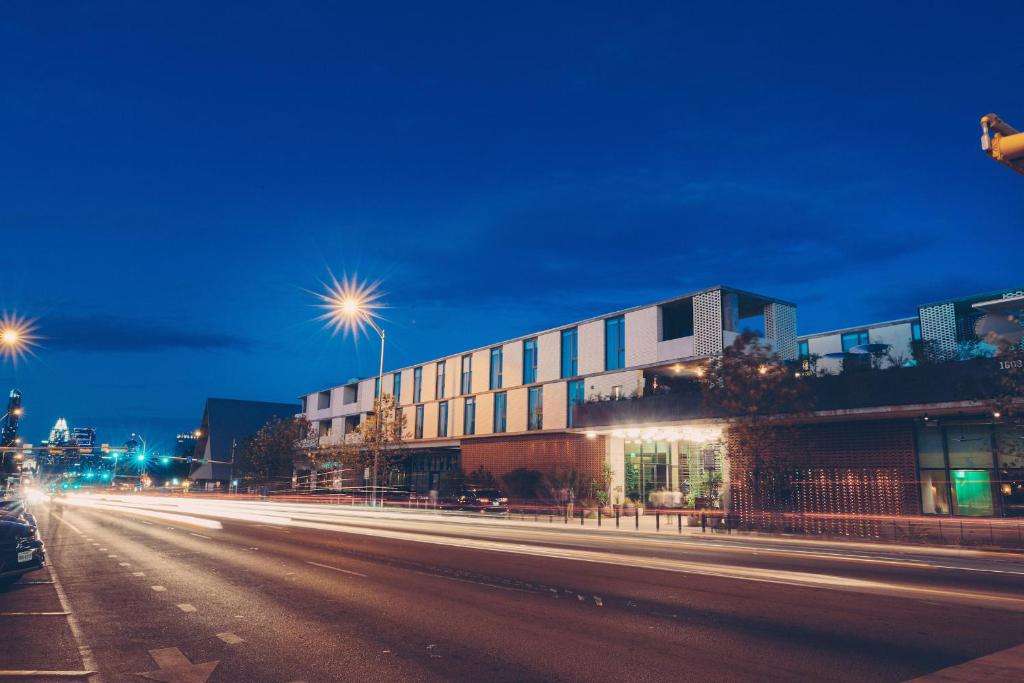 South Congress or SoCo as some of the locals call it, is one of Austins coolest neighborhoods. It was once a very sketchy part of town but gentrification has turned this strip into a a street teaming with great restaurants, fantastic bars and live music venues, boutique shops, and really cool boutique hotels.

Hotel San José is credited by many as being instrumental in the transformation of South Congress from dirty and dangerous to the cool hipster neighborhood it is today. What was once a hotel for down and outs is now one of Austin’s top boutique hotels. Hotel San José also run an iconic music festival in the parking lot during SXSW.

Austin Motel is an icon in the city. Known for having the most famous sign in Austin. This is a 1930s motel renovated to the height of cool. It’s not luxury it’s retro chic. They throw a mean pool party in the summer and have a great restaurant.

This small boutique hotel in Austins South Congress District is built in an 1880’s Estate. They’ve got a great pool, and the rooms are all very high-end. You won’t be disappointed. Hotel Saint Cecilia is popular with couples; it’s really romantic. The super-cool rooms and suites all feature fancy sound systems. Saint Cecilia was the patron saint of music, after all. Its theme is history meets rock and roll in a 5-star hotel boutique hotel.

South Congress Hotel is a really stylish boutique hotel in the heart of SoCo’s shopping district. Surrounded by great restaurants, bars, and boutique shopping this is a popular part of town for couples. There’s great live music nearby, South Congress is every bit as good as Sith Street.

Kimber Modern is a small boutique hotel with only 7 super cool suites. Located in the hip South Congress neighborhood, this is a great place to stay for couples. There’s no restaurant but you’re on South Congress so there’s plenty of great restaurants nearby (you can’t beat Home Slice Pizza).

Embassy Suites by Hilton Austin is just South of the bridge on South Congress. It’s not the coolest hotel but it’s a large mid priced hotel in a great location. Both downtown and SoCo are in easy reach. There’s an in house restaurant and bar and free breakfast.

Billing itself as a downtown hotel close to South Congress Hyatt Regency really is both. It’s just across the lake from downtown Austin and an easy walk to anywhere in South Congress. Hyatt Regency is a large 4 star hotel offering luxury in a lakefront setting. This is an excellent hotel for couples.

The Carpenter Hotel is located just south of Lady Bird Lake. A little west of South Congress, but an easy walk away. This stunning boutique hotel is very popular with couples and the location makes it great for families. It’s close to Butler Park, the hike and bike trail, and Zilker Park.

Things to Do in South Congress

There’s a lot of must visit places in Austin, many of which are located in South Congress. For live music you simply have to visit The Continental Club. The best Pizza in Austin is SoCo’s Home Slice Pizza, while The Big Top Candy Shop is a must for kids and diabetics. Don’t miss Jo’s Coffee and the famous I Love You So Much mural. While Allens Boots, Parts and Labour, and Monkey See, Monkey Do are all iconic shops on South Congress. Or just relax with an ice cream at Amy’s Ice Creams.

No comments to show.