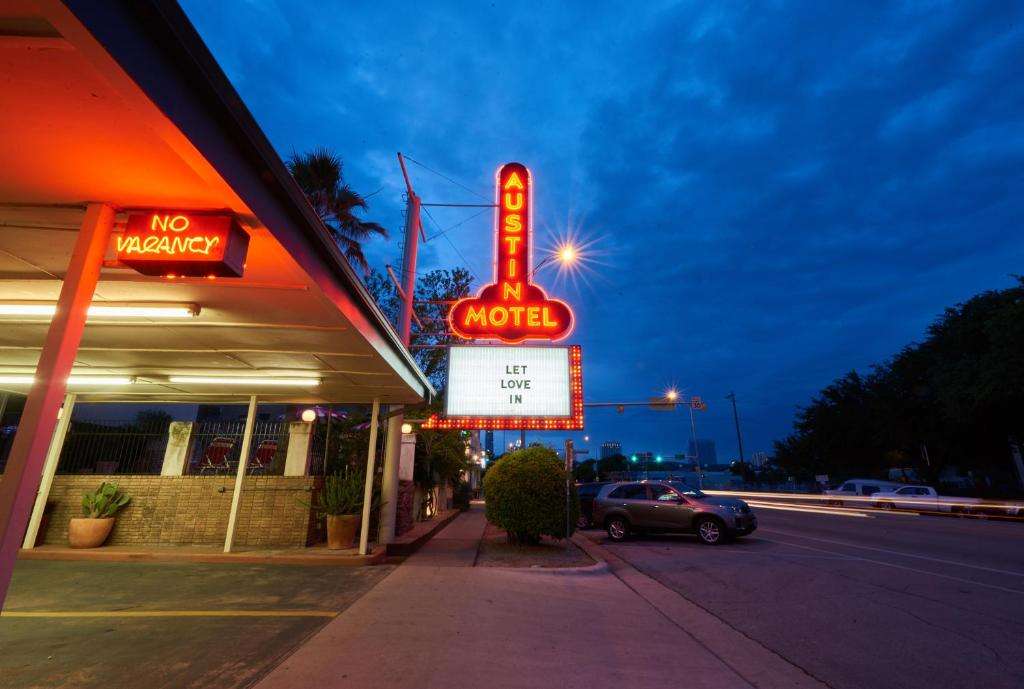 Hotels for hipsters. These are Austin’s coolest hotels.

Austin Motel with its iconic sign resembling a huge cock and balls is known locally as the penis hotel. The motel and that sign were erected 1938. It is the height of cool, with very fun, funky, but tasteful rooms. And one of the best party pools in Austin. This is where cool people who aren’t rich yet stay and play. Far from being a dive motel – this is retro cool and very well done. Possibly the most hip hotel in Austin.

Between Barton Springs Pool and Lady Bird Lake is The Carpenter Hotel. This stunning boutique hotel is seriously cool. Couples love the location, the decor, and pretty much everything about it. The Carpenter Hotel set a new standard for classy small hotels when it opened in 2018. Hipsters love to sip cocktails by the pool or groom their beards in the bespoke timber bathrooms.

Heywood Hotel is an architectural award winning small hotel close to 6th Street. They offer only 7 suites. Each suite is thoughtfully designed and with an understated luxury. It’s about quality and simplicity done well, not ostentatious displays of luxury. Hipster couples love this cool hotel, both for its location and its amenities.

Is it just cool because it’s old or has it made it to old age because it’s so cool? Either way The Driskill has been wowing visitors to Austin since 1886. This place has some incredibly cool suites with features you won’t get anywhere else like the stained glass windows, and huge balconies.

The LINE shows what great architects can do. Totally transforming what was once a tired hotel in a good location. It’s now one of the coolest hotels in Austin. It’s got a great 1960s feel to it. A great pool, and some great rooms with you guessed it great views.

Hotel Ella is a unique boutique hotel in downtown Austin. It’s built in historic Goodall Wooten House. This is one of the original Austin Estates and was once a private home. Built in 1900 it was extensively renovated in 2013 when it was turned into Hotel Ella. It’s an awesome opportunity to stay in a slice of Austin History.

This small boutique hotel in Austins hip South Congress District is built in an 1880’s Estate. They’ve got a great pool, and the rooms are all very high-end. You won’t be disappointed. Hotel Saint Cecilia is popular with couples; it’s really romantic. The super-cool rooms and suites all feature fancy sound systems. Saint Cecilia was the patron saint of music, after all. Its theme is history meets rock and roll in a 5-star hotel boutique hotel.

Hotel San José has had a long and interesting history. Starting as a Motor Court in 1936. It was a residential dive hotel in a terrible part of town before gentrification transformed the neighborhood and visionary owner Liz Lambert transformed the hotel into the super cool boutique hotel that it is today. Hotel SanJosé run an iconic music festival in the parking lot and really know how to put on an event. This place is cool as a cucumber.

Hotel Magdalena is another cool hotel from Bunkhouse. This one’s in South Congress on Music Lane. Hotel Magdalena is famous for it’s picnic by the pool events. The bathrooms have incredible coloured tiles, and the rooms have a minimalist style. The terrace suite is one of the coolest hotel rooms in Austin.

It may be a Hilton but don’t be fooled, this a seriously cool hotel. Right in the heart of downtown Austin with a classy rooftop terrace, pool and bar. The rooms here have a more stylish and less ostentatious feel than the usual Hilton.

Cool people have a lot of friends, so sometimes they need a room for 8. South Congress Hotel actually has a room with two sets of king bunk beds. That’s a little weird but it’s also super cool.

Lone Star Court in The Domain is a really cool Texan barn style building. the rooms are large and well decorated. They have a great pool and an awesome firepit in the evenings. It feels like you are out in the hill country but you’re actually in the heart of Austin’s prime shopping district.

Located in hipster East Austin on East Cesar Chavez ARRIVE is a really cool spot for younger couples they’ve got two great bars in house and it’s over the road from Whisler’s (a bar you’ll want to visit while you’re in Austin). The hotel itself is really cool, with great use of exposed concrete, it’s a stunning piece of architecture.

Kimber Modern is a small hip hotel with only 7 super cool suites. Located in the South Congress neighborhood, this is a great place to stay for couples. There’s no restaurant but you’re on South Congress so there’s plenty of great restaurants nearby (you can’t beat Home Slice Pizza).